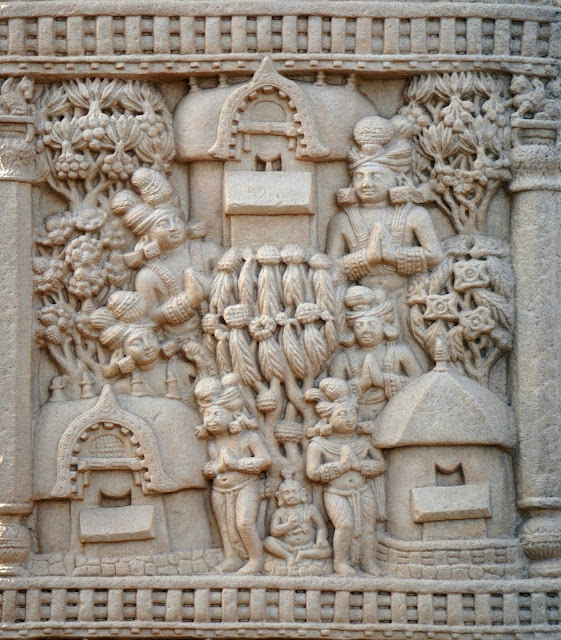 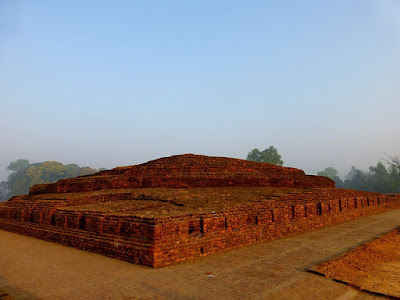 Further information: Buddhist architecture
Buddhist caves
During the time of the Buddha (c. 563/480 or c. 483/400 BCE), Buddhist monks were also in the habit of using natural caves, such as the Saptaparni Cave, southwest from Rajgir, Bihar.[19][20] Many believe it to be the site in which Buddha spent some time before his death,[21] and where the first Buddhist council was held after the Buddha died (paranirvana).[19][22][23] The Buddha himself had also used the Indrasala Cave for meditation, starting a tradition of using caves, natural or man-made, as religious retreats, that would last for over a millennium.[24]
Jivakarama vihara monastery. Oblong communal hall (remains), 6th century BCE.
Monasteries
The first monasteries, such as the Jivakarama vihara and Ghositarama monastery in Rajgir and Kausambi respectively, were built from the time of the Buddha, in the 6th or 5th centuries BCE.[25][26][27] The initial Jivakarama monastery was formed of two long parallel and oblong halls, large dormitories where the monks could eat and sleep, in conformity with the original regulations of the samgha, without any private cells.[25] Other halls were then constructed, mostly long, oblong building as well, which remind of the construction of several of the Barabar caves.[25][28] The Buddha is said to have been treated once in the monastery, after having been injured by Devadatta.[25][29]
Stupas at Piprahwa are some of the earliest surviving stupas.
Stupas
Religious buildings in the form of the Buddhist stupa, a dome shaped monument, started to be used in India as commemorative monuments associated with storing sacred relics of the Buddha.[30] The relics of the Buddha were spread between eight stupas, in Rajagriha, Vaishali, Kapilavastu, Allakappa, Ramagrama, Pava, Kushinagar, and Vethapida.[31] The Piprahwa stupa also seems to have been one of the first to be built.[31] Guard rails—consisting of posts, crossbars, and a coping—became a feature of safety surrounding a stupa.[13] The Buddha had left instructions about how to pay hommage to the stupas: "And whoever lays wreaths or puts sweet perfumes and colours there with a devout heart, will reap benefits for a long time".[32] This practice would lead to the decoration of the stupas with stone sculptures of flower garlands in the Classical period.[32]
temples
elliptical Hindu temples with mandapa from Nagari, Chittorgarh and Vidisha near Heliodorus pillar have been dated to 4th century BC or 350-300 BC.