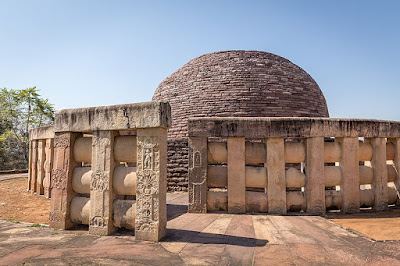 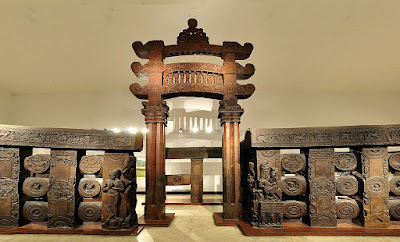 an Indian palace depiction in Mahabodhi railing, showing vaulted underground chambers called ''suranga,'' as described by Kautiliya in Arthashastra; Shunga period, 2nd-1st BCE
Archaeological excavation conducted by Archaeological Survey of India (ASI) at Kausambi revealed a palace with its foundations going back to 8th century BCE until 2nd century CE; and built in six phases. The last phase dated to 1st - 2nd century CE, featured an extensive structure which was divided into three blocks and enclosed two galleries. There was a central hall in the central block and presumably used as an audience hall surrounded by rooms which served as a residential place for the ruler. The entire structure was constructed using bricks and stones and two layers of lime were plastered on it. The palace had a vast network of underground chambers also called Suranga by Kautilya in his Arthashastra,[64] and the superstructure and the galleries were made on the principle of true arch. The four-centered pointed arch was used to span narrow passageways and segmental arch for wider areas. The superstructure of the central and eastern block was examined to have formed part of a dome that adorned the building. The entire galleries and superstructure were found collapsed under 5 cm thick layer of ash which indicates destruction of the palace through conflagration.[65]
A palace architecture has also been uncovered at Nagarjunakonda