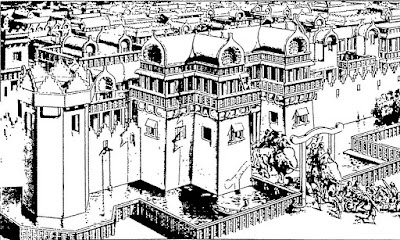 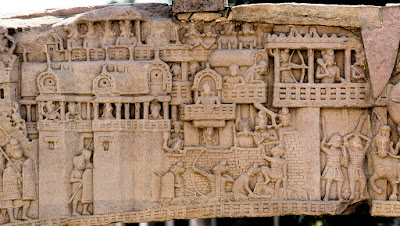 Conjectural reconstruction of the main gate of Kushinagar c. 500 BCE adapted from a relief at Sanchi .City of Kushinagar in the 5th century BCE according to a 1st century BCE frieze in Sanchi Stupa 1 Southern Gate.

Rajgir, old city walls 6th century BCE
From the time of the Mahajanapadas (600 BCE–320 BCE), walled and moated cities with large gates and multi-storied buildings which consistently used arched windows and doors and made an intense use of wooden architecture, are important features of the architecture during this period.[13] The reliefs of Sanchi, dated to the 1st centuries BCE–CE, show cities such as Kushinagar or Rajagriha as splendid walled cities during the time of the Buddha (6th century BCE), as in the Royal cortege leaving Rajagriha or War over the Buddha's relics. These views of ancient Indian cities have been relied on for the understanding of ancient Indian urban architecture. Archaeologically, this period corresponds in part to the Northern Black Polished Ware culture. Geopolitically, the Achaemenid Empire started to occupy the northwestern part of the subcontinent from c, 518 BCE.


Jetavana of Sravasti, Sanchi Stupa 1, Northern Gateway.
Various types of individual housing of the time of the Buddha (c. 563/480 or c. 483/400 BCE), resembling huts with chaitya-decorated doors, are also described in the reliefs of Sanchi. Particularly, the Jetavana at Sravasti, shows the three favourite residences of the Buddha: the Gandhakuti, the Kosambakuti and the Karorikuti, with the throne of the Buddha in the front of each. The Jetavana garden was presented to the Buddha by the rich banker Anathapindika, who purchased it for as many gold pieces as would cover the surface of the ground. Hence, the foreground of the relief is shown covered with ancient Indian coins (karshapanas), just as it is in the similar relief at Bharhut. Although the reliefs of Sanchi are dated to the 1st centuries BCE–CE, portraying scene taking place during the time of the Buddha, four centuries before, they are considered an important indication of building traditions in these early times.